I can’t remember the last time I push started a car but I remember it was all too common an occurrence when I first got my licence back in the early 90s. In an age where most cars had manual transmissions and before roadside assistance was ubiquitous, the ‘push start’ was how you got your car going when your battery was flat (which happened all too often).

But push starting a car was not easy. First, you had to hope that you were parked on the flat (in fact, if you knew you had a dodgy battery, you would generally park facing downhill just in case you couldn’t get it started). Second, you’d have to rustle up some muscle. You would need at least two people, one to push and one to control the car and drop the clutch, but the more people pushing, the easier it was.*

*ironically it was the person who was responsible for the flat battery (i.e. the owner of the car) that generally got the cushy job of sitting in the driver’s seat and steering the car.

We risk losing the momentum we have

And this is a beautiful analogy for change within organisations. Momentum around change is incredibly hard to create and yet once we have it, we don’t maintain it. We so often consider change in terms of stand-alone projects and happily let change ‘conk out’ after the project is complete. But when we waste momentum, we need to put a whole bunch of extra energy into generating it again next time around.

The power of continuous improvement is in rearranging projects in such a way that momentum is both created and maintained. Change becomes a system rather than an event.

Right now, businesses are at a decision point as to how they want to approach change going forward. Over the last 12 months, organisations have been forced to generate incredible momentum around change, especially when it came to the adoption of digital technology. But people’s energies are starting to wane and for many organisations, the systems and processes aren’t there to make change self-sustaining. If this change momentum is lost, then at some point in the future, they will need to create it all over again.

Although they use different tools and have different applications, methodologies such as Agile for software development, Lean for waste reduction, and Digital Champions for automation are all based on the belief that making change continuous is the only thing that creates and grows momentum over time.

There is a growing chorus of voices saying we need to return to the office, go back to the old ways, to put the brakes on. And although I acknowledge that last year has been mentally and emotionally tiring for many and there is a strong desire to put it all behind us to stop and rest, I would tell you that momentum around change is too valuable to waste. 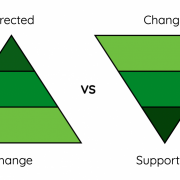